Introduced in the 15th century, the carrack features a rounded stern, with the planks curving around from the sides to the rudderpost, the forecastle located directly above the stem, with the bowsprit rising from its top, an arrangement that had been unaltered since the first “battlements” had been installed on the bow of a sailing warship, and sterncastle which forms an integral part of the hull.

The carrack was the definitive beast of burden of the Age of Exploration; Magellan, for example, had an all-carrack fleet with which he set to circumnavigate the globe in 1519.

Carracks are used both as small warships and merchantmen; the English ‘defensible ships’ which make up the bulk of its merchant fleet are well-armed, sturdy carracks which can quickly be converted to privateers as needed. 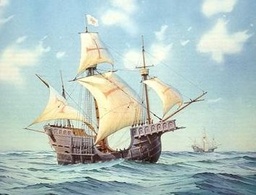