The Comtois is a very old breed that is thought to have descended from horses brought to France by the Burgundians, a people from northern Germany that immigrated in the fourth century. The Franche-Comte and the Jura Mountains on the border of France and Switzerland are the original breeding ground of the Comtois breed. In the sixteenth century, the Comtois was used to improve the horses of Burgundy and became famous as a cavalry and artillery horse.

The Comtois is a lightly built draft horse. The head is large with alert eyes and small ears. The Comtois has short, strong legs and muscular hindquarters. The main and tail are both thick. They are found in varying shades of chestnut often deepening to a dark chocolate brown or bay. The mane and tail are by contrast a light flaxen. They stand between 14.1 and 15.1 hands.

Comtois are hardy and live to an old age. They are good-natured, easy to train and hard working. 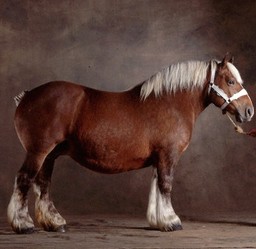