All stats per the Flashing Blades core rules for two-handed swords, pages 15-7

A character with the Polearms martial skill may attempt to parry and break an attacker’s polearm using a two-handed sword. The attempt to parry is resolved normally, including modifiers for the type of attack, attacker’s weapon attack bonus, weapon parry bonus, and expertise; because the attack of a polearm may always be guessed, there is always a + 3 bonus when parrying a polearm. A polearm is treated as having a weapon strength of 3 for purposes of weapon breakage (section 4.42, Weapon Breakage).

On a successful parry, the defender may attempt to break the attacker’s polearm. This is a normal action. Compare the weapon strength of the two-handed sword to the weapon strength of the polearm and roll for breakage; if the defender’s strength equals or exceeds the two-handed sword’s Advantageous Strength (section 4.53, Weapon Damage), add one to the difference in steps between weapon strengths. Roll a D6, if the number is equal to or less than the difference in steps, the polearm breaks. A broken polearm may be used as a club.

The Dopplehänder (German, “double-hander”), also known as the Bidenhänder (German, “both-hander”), is a large 1.8m long two-handed sword used since the 14th century, particularly by the Landsknecht during the 16th century. They are primarily used to shatter pike shafts and injure or kill pikemen.

The guard may be plain or ornate with a heart- or pear-shaped heavy pommel. Occasionally a blunted portion of the forte, the ricasso or Fehlschärfe (German, “missing sharpness”) at the base of the blade, allows a hand to be placed below the lower guard to “shorten the grip” and make the sword handle like a polearm, allowing wielders to crudely repel a cavalry charge. The swords have hilt-mounted side-rings and enlarged cross-guards of up to 35 cm across. Along the blade, some 10–20 cm from the upper guard, Parierhaken (German, “parrying hooks”) shaped like lugs or flanges act as a guard for the ricasso to prevent other weapons from sliding down the blade, allowing an experienced user to duel with the sword.

The two-handed sword remains popular among the Swiss and Germans. The soldiers who wield them, known as Doppelsöldner, are selected on the basis of their size and strength and receive twice standard pay because they take additional risk by fighting on the front line.

Two-handed swords with a wavy blade are known as flamberges or flambards. 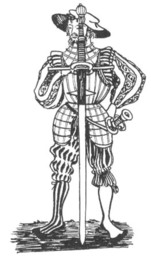