The Friesian Horse originated in Friesland, a North See coastal province of the United Provinces. Friesland was settled over a millenium ago. Fresians are tradesmen, seafarers, farmers and horse breeders.

Armored knights of old found this horse very desirable, having the strength to carry great weight into battle and still maneuver quickly. Later, its suppleness and agility made the breed much sought after for use in riding schools in Paris and Spain during the 15th and 16th centuries. Before an elegant carriage this breed has few rivals, and throughout Europe the royal courts used them as coach horses. During the 16th and 17th centuries, but probably also earlier, Arabian blood was introduced, especially through Andalusian horses from Spain. This has given them a high knee-action, a small head and a craning neck.

Friesian Horses are always black. White markings are not allowed on the body or legs. They have a long, thick, flowing mane and tail. The Friesian Horse holds its head high and proud with an arching neck. The animated gait is natural. The body is strong and deep. Friesian Horses stand 14 to more than 15 hands. 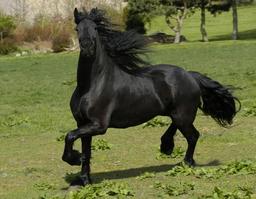