Galleons are large ships which serve as combination warship and cargo carrier. Galleons are sluggish behemoths, not able to sail into or near the wind, but they are well-defended by their size and the many heavy cannon they carry making direct assault upon them dangerous and difficult. A Galleon has two to three decks. Most have three masts, forward masts being square-rigged, lateen-sails on the mizzenmast, and a small square sail on her high-rising bowsprit.

The Spanish treasure fleet (flota) from New Spain is composed largely of galleons; they are also used to convey silver across the Mediterranean to Genoa and Naples, to pay Spanish soldiers and diplomats in Italy and the Netherlands. Galleys also travel across the Pacific Ocean from Manila in the Phillipines to New Spain. 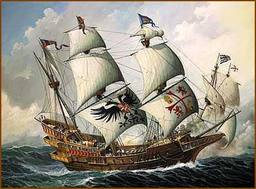