The Holsteiner or Holstein horse is the product of systematic breeding that has been ongoing in Schleswig-Holstein since the thirteenth century. This area is one of the most successful horse breeding regions in the Empire and the Holsteiner is one of Empire’s oldest breeds. The Holsteiner horse traces its ancestry to Neapolitan, Spanish and Oriental foundation stock that was carefully crossed with the native stock of the region. Originally the horse was valued by German farmers for its strength, steadiness and reliability, and by the military for its courage and ability.

The first written records of Holsteiner horse breeding date back to the thirteenth century when the Count of Holstein and Storman, Gerhard I, granted grazing rights to the monastery at Uetersen to the privately-owned land around the cloister. The monks continued to breed fine horses until the time of the Reformation when the properties of the monasteries were transferred to private landowners. Realizing the importance of these horses both on the farm and as dependable warhorses, these landowners continued the work begun by the monks. Holsteiners are exported across Europe each year.

Traditionally, the Holsteiner has been bay with a preference for no or few white markings. It is a well balanced horse, maturing between 16 and 17 hands with round, generous strides and a natural, elastic movement. A lovely head with large, kind eyes is carried on a nicely arched neck, rising upward out of its withers, producing elegance, lightness and self-carriage. Their temperament is relaxed and willing, with good character and an eagerness for work. 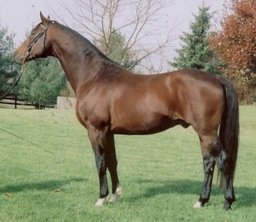