The Noriker originated in and received its name from the Roman province of Noricum, an area which roughly approximates the boundaries of Habsburg Austria. The Romans constructed an extensive road system in Noricum and, as old relics show us, horses closely resembling the Noriker were used to pull wagons and as pack animals. Only this horse could fulfill the needs of the farmers who worked the high pastures. The breed is renowned for being sure-footed, and capable of pulling considerable loads over long distances..

The Noriker is a medium-sized heavy draft horse which typically stands 16 to 16.2 hands. It has a large head set on a short, muscular neck. The chest and shoulders are ample and muscular. It appears in many colors including bay, brown, chestnut and dun. 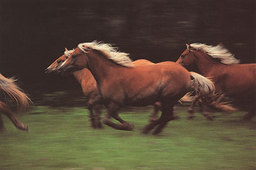