A targe may be used as a left-hand weapon to aid parries by those trained in the Highland style or worn as a piece of armor, but not both at the same time. It provides no bonus to parry.

The targe is a round shields approximately 50 cm in diameter, slightly larger than a buckler. It is constructed from two thin layers of flat wooden boards, with the grain of each layer at right angles to the other, and fixed together with small wooden pegs. The face of the targe is covered with tough cowhide, which is often decorated with embossed patterns traditional among the Highlanders. The cowhide cover is fixed to the wood with brass, or occasionally silver, nails; brass plates may also fixed to the face of the shield for strength and decoration. Some targes have center bosses of brass, and a few of these could accept a long steel spike, which screws into a small “puddle” of lead that is fixed to the wood, under the boss. When not in use, the spike can be unscrewed and placed in a leather sheath on the back of the targe. The nails and bosses are usually arranged in patterns, either concentric circles, or a centre boss with smaller bosses around this. The back of the targe is covered in deerskin, occasionally with straw for additional padding. 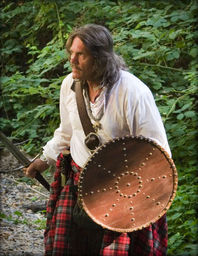