Half-brother to King Louis XIII, César de Bourbon (b. 1594) is the son of Henri IV and his official mistress Gabrielle d’Estrées, legitimised in 1595. He is married to Françoise de Lorraine, duchesse de Mercoeur et de Penthièvre; they have three children.

Vendome is also a Grand Prior of the Knights of Malta for the langue of France. He is lord of the order’s sovereign enclave of Le Temple in Paris.

Vendôme was a leader in the opposition to the Queen Mother during her regency, but he bears no surfeit of love for his half-sibling, the king. 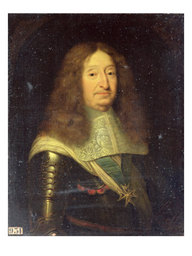