Born to a poor Gascon family, Arnaud de Ferusac (b. 1593) pursued a military career, joining King Henri IV’s personal company of chevaux-légers in 1610. Ferusac served through the regency of the Queen-Mother, then guarded the young king, seeing action in numerous campaigns, including the War of the Mother and Son in 1620 and the campaigns against the Huguenots in 1621 and 1622, suffering a serious wound from a pike at Montauban. In 1622, he was among the carabiniers of the company trained to fight as a musketeer, forming the core of the King’s Musketeers. In 1625, after being exiled from Paris following a duel involving the Cardinal’s Guard, Ferusac joined a company of the Navarre Regiment and saw service under Toiras at the Île de Ré.

Ferusac is regarded as as a tough, cagey soldier, particularly on campaign where he earned a reputation as a resourceful forager. His carousing, gambling, and frequent indifference to discipline often causes [[:tréville | Tréville]], the captain-lieutenant of the King’s Musketeers, frustration, but the sergeant’s skill in the field makes him a valuable member of the gentlemen of the company. 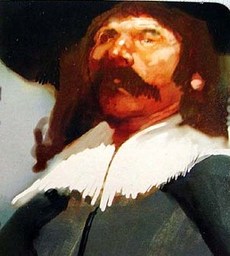