Possessor of a proud name, the descendent of a crusader who fought with the Knights of St John at Rhodes and against the Turks at the siege of Vienna, Gustav von Kalmbach (b. 1599) was born without fortune or prospects other than a military career. He fought for the Emperor at White Mountain in 1620, and under Tilly in 1622 at Mingolsheim, Wimpfen, and Hochst, where he was seriously wounded by a musket ball.

He arrived in France in 1624 and joined the guards company of the Royal-German mercenary regiment, in which he serves as ensign and fencing master. It’s rumored that von Kalmbach was forced to leave Vienna over a duel with one of the Emperor’s courtiers, but the taciturn young soldier says little about his past. 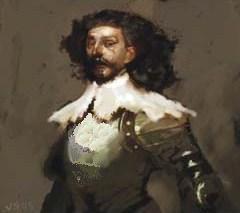