Lady-in-waiting and confidant of Anne of Austria

Marie Aimée de Rohan, the daughter of the Hercule de Rohan, duc de Montbazon, grew up on her family’s estates in Bretagne and Anjou. At seventeen Marie (b. 1600) married the duc de Luynes, the king’s chief falconer and favorite. Marie was from an old and distinguished noblesse d’epee family while Luynes was a simple écuyer elevated by his relationship to the king; the marriage was clearly to the advantage of Lunyes at Marie’s expense. Nonetheless, through Luynes’ offices, Marie was selected to be the head of the queen-consort’s household in 1618, beginning an intimate friendship between the two women.

In 1620, Marie gave birth to a son, Louis-Charles d’Albert, but by the following year, her husband, the duc de Luynes, fell into disfavor with the king, dying of disease while on campaign against the Huguenots that fall. The duchesse de Luynes was engaged again by 1622, marrying the duc de Chevreuse of the powerful family of Guise. A poweful courtier but an indifferent husband, the duc provided Marie the means of remaining at court and she provided him with a fortune he quickly turned to gambling and mistresses.

The duchesse proved no less amorous than her husband; indeed, it’s rumored the the duc was her lover before the death of Luynes. It’s widely known that the duchesse is the mistress of the English ambassador, Lord Holland, despite being pregnant with the duc de Chevreuse’s child.

Marie’s conduct scandalizes the prudish king. Louis blames the duchesse for one of Anne’s miscarriages as the queen fell while the two women were running through the Louvre together in some frivilous game. It’s rumored that Marie was behind the humliation of Cardinal Richelieu, tricking the prelate and minister into dancing a sarabande before the queen in fool’s motley on the pretext that the queen wanted to take Richelieu as a lover – this earned the duchesses the bitter enmity of the Cardinal as well.

Marie is beautiful, vivacious, and fearless to the point of foolhardiness. 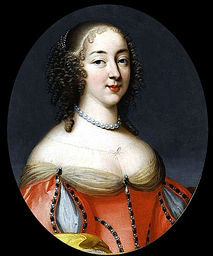