GrandsCondé (b. 1588) is second-in-line to the throne of France. The leading grand, jealous of the privileges that come with rank, he is one of the most poweful and influential men in France. In 1614, Condé led a rebellion joined by a number of the grands against the king to force the removal of the marquis d’Ancre, a foreign favorite of the queen-mother and head of the king’s counil. In 1616, the rebellious prince was arrested and imprisoned at Vincennes for the next three years; after Ancre’s assassination, the prince was freed and cleared of wrongdoing by the Parlement de Paris.

Condé’s father and grandfather were leaders of the Huguenot cause during the Wars of Religion in the 16th century, but the Catholic prince turned his back on his Huguenot allies after his release from Vincenes, leading the royal armies in the campaigns against the Huguenots in 1621 and 1622. He developed a reputation for brutality against his family’s co-religionists – opposed to the peace treaty offered to the duc de Rohan in 1622 at Montpellier, Condé left France on a pilgrimmage to Loretto in Italy. On his return he rejoined the king’s council and continues to agitate against the Huguenots. He distrusts Richelieu and is wary of the cardinal’s influence and rapid ascendance to the head of the king’s council.

Condé is proud and tempermental. He maintains a cool relationship with his wife, Charlotte-Marguerite de Monetmorency, but he is close friends with his brother-in-law, the duc de Montmorency. Condé dotes on his son, Louis (b. 1621). 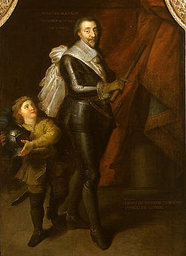