Charlotte-Marguerite is the sister of the duc de Montmorency, styled the “first baron of France.” As a teen, Charlotte (b. 1594) was contracted to marry Henri II, prince de Condé. The king, Henri IV, planned to take the young woman as a mistress, and the newlyweds fled to Brussels in 1609, with the royal cavalry in hot pursuit, to escape the king the king’s lust. After the king’s assassination the next year, the prince and princesse returned to France. Despite their adventurous beginnings, the couple were incompatible with one another and Condé petitioned for a divorce from the princesse. By 1614, the prince was in revolt against the king and the queen-mother’s favorite, Ancre, and in 1616 Condé was arrested and imprisoned in the royal fortress at Vincennes; despite their differences, Charlotte joined him in his captivity, bearing him a daughter during this time. The prince and princesse were freed in 1619 and since then the two have maintained a steadfast if cool and distant relationship.

In 1621 Charlotte bore the prince an heir, Louis, styled the duc d’Enghien.

Charlotte is descended from one of the most illustrious families in France and as the princesse de Condé she could find herself queen of France some day. Her manner is suitably imperious, but she is loyal and generous to her friends. Charlotte is close to the marquise de Rambouillet and is a regular member of her salon. 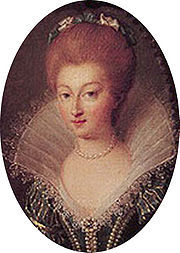