Jean Armand Duplessis de Richelieu (b. 1585) was the youngest son of a noble Poitevin family; his mother was the daughter of an advocate in the Parlement of Paris. His father had done good service under Henry III, and became Grand Provost of the royal household, and Knight of the Holy Ghost. After his death in 1590, Armand, his youngest son, was at first educated as a layman, intending to follow a military career but in 1602 he was called upon to leave the “Academy,” where he was receiving the usual soldierly training of his class, and fit himself for the family bishopric of Luçon after his brother, Alfred, resigned the office and retired to the Grande Chatreuse, obtaining the see from Henry IV and withdrawing to the country to take up his theological studies under the direction of Bishop Cospéan of Aire. In 1606 he was formally nominated to this bishopric, in 1607 he went to Rome and was dispensed by the Pope from the canonical rule of age, and in 1608 he took up his duties in the see. Here, with a vigilant eye fixed on the Court and on politics, he performed his pastoral duties, studied, wrote, and reflected, and formed some of his few friendships, including the Capuchin, François du Tremblay, better known as Père Joseph.

In his diocese, Richelieu showed great zeal for the conversion of Protestants and appointed the Oratorians and the Capuchins to give missions in all the parishes. Richelieu represented the clergy of Poitou in the Estates-General of 1614, and he was already so far distinguished as to be chosen to make the final address on behalf of the clergy when their cahier was presented to the king, demanding demanded that bishops and prelates be summoned to the royal councils, that the distribution of ecclesiastical benefices to the laity be forbidden, that the Church be exempt from taxation, that Protestants who usurped churches or had their coreligionists interred in them be punished, and that the decrees of the Council of Trent be promulgated throughout France. He ended by assuring the young king that the desire of the clergy was to have the royal power so assured that it might be “comme un ferme rocher qui brise tout ce qui gheurte” (as a firm rock which crushes all that opposes it).

Richelieu was named secretary of state on 30 November, 1616, by the queen-mother, but after the assassination of Concini, favourite of Marie de’ Medici, he was forced to leave the ministry and follow the queen-mother to Blois. To escape the political intrigues which pursued him he retired in June 1617, to the priory of Coussay and, during this time of leisure caused by his disgrace, published in October 1617 his Les principaux points de la foi de l’église catholique, défendus contre l’éecrit adressé au Roi par les quartre ministres de Charenton . Richelieu continued to be represented to the king as an enemy to his power; to disarm suspicion, Richelieu asked the king to name a place of exile, and at his order went in 1618 to Avignon, where he passed nearly a year and where he composed a catechism which became famous under the name of Instruction du chrétie ".

With the help of the duc d’Épernon, Marie de’ Medici escaped from Blois in 1619 and again in 1620, initiating the Wars of the Mother and Son. After the rout of Marie’s forces at Ponts-de-Cé, Richelieu was chosen by the duc de Luynes to negotiate for peace between Louis XIII and his mother. Richelieu remained Marie’s creature, and at her insistance he was created cardinal by Gregory XV in 1622. On 19 April, 1624, he re-entered the Council of Ministers, and on 12 August, 1624, was made its president. 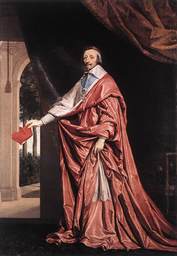