The daughter of a cadet branch of the Genoese contes di Ventimiglia, Lucrezia de Montchèvre married the vicomte de Praz-de-Lys in 1610, delivering their first child, a daughter, that same year; two sons followed, in 1614 and 1617.

Lucrezia (b. 1591) and the children moved to Paris in 1624 at her husband’s direction; the vicomte wants his daughter to marry a French nobleman and for his eldest son to enter the king‘s service, over Lucrezia’s strident objections that they should go to Spain instead.

Lucrezia is an attractive woman with dark hair and eyes; her manner is cool and aloof. She refuses to use her husband’s French title, preferrring the Italian viscontessa di Prato-di-Giglio. 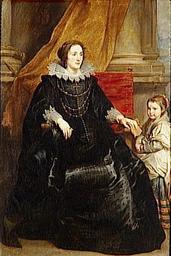