A lettre de cachet is a missive carrying orders issued by the King and his Secretary of State and sealed with the royal seal.

The power to issue lettres de cachet is a royal privilege developed during the 13th century. The principle can be traced to the Pandects of Justinian, which include the following, Rex solutus est a legibus, or ‘The king is released from the laws.’ French legal scholars interpret the imperial office of the Justinian code in a generic way, concluding that every ‘king is an emperor in his own kingdom,’ that is, the monarch possesses the prerogatives of legal absolutism that the Corpus Juris Civilis attributes to the Roman emperor.

This means that when the king intervenes directly in a matter, his edicts may be exempt from, and even supercede, the laws of France. Though the king’s orders could be issued by the spoken word – François de Montmorency was “prisoner in our castle of the Bastille in Paris by verbal command” of Charles IX, for example – in the 14th century the principle was introduced that the order should be written, and from this came the lettre de cachet.

Unlike lettres patentes, which contain the expression of the legal and permanent will of the king, and must be furnished with the seal of state affixed by the chancellor or keeper of the seals, the _lettres de cachet, on the contrary, may be signed by a secretary of state for the king; they bear the imprint of the king’s privy seal and are exempt from the control of the chancellor. 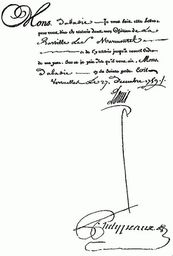